It’s almost impossible to deny the inspiration for the He-Man cartoon and it’s rather homo-erotic subtext laden universe (made into a very homo-erotic movie by Gary Goddard) is Der Golem, the German expressionism styled movie of the Jewish Legend of coming tragedy, The Golem: How He Came into the World (1920).

In The Golem: How He Came Into The World, the Jewish Legend foretells of a mighty protector who will come into the world to protect the Jewish people from a massive tragedy that is soon to befall them.

The third and last and only surviving part of Paul Wegener’s Golem trilogy, the 16th-century Jewish Legend that inspiried He-Man, The Golem: How He Came into the World was a prequel to the previous, instalments and, as such, sticks more closely to the traditional Jewish Kaballa legend. In a Prague ghetto, Rabbi Löw played by Albert Steinrück fashions and brings to life by kabbalistic alchemy a Golem (Wegener) from clay, intent on protecting his community from a terrible tragedy akin to the holocaust that he has seen foretold in the stars. Löw summons forth the spirit Astaroth, desperate to learn from him the kabbalistic magic word that brings the Golem to life and gave us the inspiration for He-Man and the Masters of the Universe many years later. 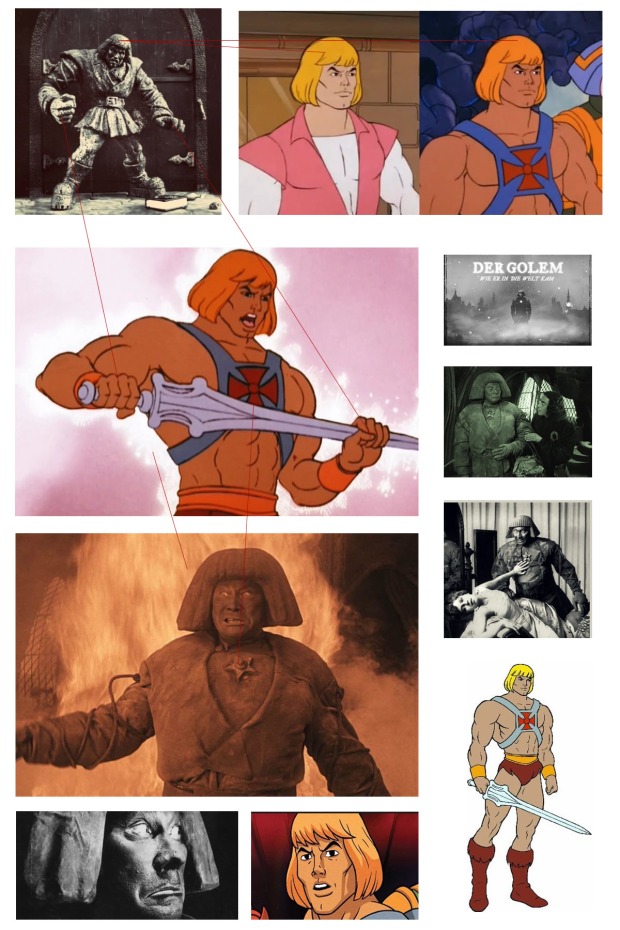 He-Man and Prince Adam combined together become the Golem with each holding visual elements relating to him and clothing. Note the positions of He-Mans hands when doing his iconic sword grab (that always looked painful) against the top classic and recognised menacing Golem pose.

Just like The Cabinet of Dr. Caligari, The Golem was intended to leave a lasting cultural impact and an esoteric secret. In its innovative and accurate rendering of Astaroth’s kabbalistic invocation, and in its portrayal of the joyful interaction between the He-Man looking Golem and a young girl, the film left a secret blueprint embedded within its celluloid for a number of later works, like F.W. Murnau’s classic Faust (1926) and future Hollywood movie lore esoteric classics like James Whale’s Frankenstein.

The character of Skeletor was also taken from German expressionism. His character lifted the image of the hooded skeleton from From Morn to Midnight (1920), the Karl Heinz Martin classic.

Skeletors character was also drawn from the expressionist era, Von morgens bis mitternachts or From Morn to Midnight. The highly camp Skeletor added to the series and then movies overall homo-erotic overtones. Along with these camp underdressed bodybuilder male character were a selection of equally underdressed women but not a single relationship existed. For example, Teela was Man at Arms foster daughter which added to the overall lack of heterosexuality within the universe of Eternia.

Intentionally shocking and even a little troubling today, From Morn to Midnight remains one of the bravest examples of German Expressionist cinema. Based on a play by one of the era’s most respected Expressionist writers, the legendary Georg Kaiser, the story centres in on a bank cashier (Ernst Deutsch) who steals cash after becoming spellbound by an beautiful customer (Erna Morena). Driven by the spell of lust she has cast upon him, he begs the sorceress to come away with him, but she laughs at him. Distraught at having to return home to his grey boring family life, the cashier goes awol, determined to seek the hedonistic pleasure and passion he believes he has been robbed of. However, on this journey he is continually haunted by dreams and visions of death, and his thoughts of what he has been duped into by the spellbinding woman and with the stolen money soon become very sour and his life tragic.

One thought on “He-Man and the Masters of the Universe, Der Golem and German Expressionism”